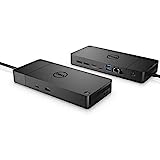 (237)
$384.99 $275.95
Docking Station: Dell Thunderbolt Dock WD19TBS offers the greatest compatibility across Dell Commercial laptops. The WD19TBS dock is also compatible with notebooks from other manufacturers such as HP and Lenovo which support industry standards for Th... read more
(as of May 27, 2022 00:19 GMT +00:00 - More infoProduct prices and availability are accurate as of the date/time indicated and are subject to change. Any price and availability information displayed on [relevant Amazon Site(s), as applicable] at the time of purchase will apply to the purchase of this product.)

A 100-foot plastic floating dock curls over the waves and six pro surfers jump from it into the water. You’ve probably seen this video launched in 2017. The video was produced by Volcom, a surfing brand in partnership with Stab, an australian surfing magazine.

The video was a big hit online when it was launched and I have been curious since then about how it came about. Turns out Volcom and The Stab have a few good resources about it and a ‘making of’ . The surfers were invited to paddle out, jump on the dock, and then catch a wave from the structure into the water.

They launch off of it with their boards, sometimes expertly and sometimes accidentally using the iconic Dock as a paddleless wave entry point. The snaky and dangerous structure will hit you if you don’t time your drop in well. When a wave approaches, the surfer can either leap directly into it or run down the dock and then hit the wave. In the first tries, they had quite a few frightening wipeouts.

The motivation was to simply have a good time entering waves without paddling. So they built a 100-foot, half-tonne plastic raft, anchoring it in the middle of the surf break on Keramas beach in Bali.

Who was the floating dock company behind The Surfing Dock?

The Dock came from Canadian company, Can Dock, which specializes in portable jetties and boat docks. But this was a much more radical use of their modular floating systems.

The combination of Candock’s technical expertise and products, and the Stab Magazine team’s know-how turned this daring sporting challenge into an astonishing accomplishment for the surf world.

A unanimous success, Stab Magazine was amazed to witness the robustness and resilience of the Candock system under such conditions, knowing far too well the power of a wave. Candock had been looking to partner with a nautical event that would give them the opportunity to push the performance limits of Candock’s floating docks.

How dangerous was the making of the Surfing Dock?

The Dock’s been called the pinnacle of performance art, and the height of creativity in surfing with their attempt at a paddle-less entry starring a two ton, 160 cube floating dock.

Yes, that is a heavy structure anchored on a surf point. Weighing in at half a tonne, the Dock was a dangerous beast when it got knocked off course. “When I was finished with a wave, I turned around and the dock snapped in half”, said Noa, one of the surfers. Imaikalani also had a close shave; “I dove under it, but my board went the other side. I had to take my leash off underwater because it was stuck.”

There was the obvious threat of the dock breaking off and crashing into the surfers and that happened. There are wires, ropes, tons of waves, other surfers / surfboards, and the dock itself whipping around freely. As Noa recalls, “It kicks like a snake. It does this weird snake thing and it whips right at the end.”

The making of video is available at VOlcom website and shows how the structure was assembled and towed into the lineup.

Candock has a history of daring projects

Candock was selected by the Apsara Authority in Cambodia to be the official supplier for a floating pedestrian bridge at the world-famous Angkor Wat temple in Siem Reap. This impressive bridge measures approximately 200 m long by 10 m wide and it provides tourists access to the Angkor Wat temple for 5 years, while the original causeway is being restored.

Other surfers tried emulating the feat and were quite succesful. On the video below posted on Facebook, Fernando Stalla jumps from a floating dock into a wave in Puntamita, in Mexico.

(68204)
$12.99 $11.92 (as of May 26, 2022 21:05 GMT +00:00 - More infoProduct prices and availability are accurate as of the date/time indicated and are subject to change. Any price and availability information displayed on [relevant Amazon Site(s), as applicable] at the time of purchase will apply to the purchase of this product.)
Attracts & Kills – Kills common household ants including acrobat, crazy, ghost, little black, odorous house, pavement, and other sweet-eating ants Kills the Ants You See & the Ones You Don't – As worker ants discover the bait, they share it with the ... read more