As summer starts to roll around, there is one thing on everyone’s mind; what is the best way to take advantage of the gorgeous summer weather? For many people, the answer is simple enough – spend as much time as possible out on the water. And while there is certainly something to be said for simply being out on the water, it goes without saying that certain pieces of equipment will make your time out even more enjoyable; an inflatable dock is one such item. There are many makes and models of inflatable docks, but today I’m going to be talking about the Paddle North inflatable dock and swimming platform.

My first impression of this inflatable dock was very positive. They say you shouldn’t judge a book by its cover, but this is one time you can feel safe doing so; this is a gorgeous inflatable dock. The faux-wood appearance, while it doesn’t affect the functionality of the dock, looks really good. It makes any humble lake outing waterfront feel like some kind of five-star affair. And the Paddle North inflatable dock lived up to this initial first impression. It’s stable enough to function as a kind of aquatic table/couch/sunbathing spot, and, if you’re feeling a little more adventurous, it is sturdy enough to use as a launch point for all sorts of water vehicles,

In terms of other pros, it’s also worth noting that this inflatable dock is very user friendly; it features a universal valve, meaning it is compatible with any kind of air compressor or pump that you may have on hand. This was especially handy for me; I’ve had times where my dock wasn’t compatible with my air pump, which might be the fastest way to kill the fun of a day on the water. That won’t be a problem with the Paddle North inflatable dock. In a similar vein, it also features a “bleeder” valve that keeps the dock from being over-inflated. This is a big help if you’re worried about over or under-inflating water equipment.

However, this dock does not come without its drawbacks, and it is important to highlight these. The biggest issue for some buyers will be the size. It weighs in at 48 pounds, and its 9 by 6 feet in size. While this certainly contributes to its sturdiness, it also can be a bit of a pain to move around when it’s fully inflated. Unless you have three or four people with you willing to carry the dock around, moving it more than a few feet is going to be sort of a chore. But one can always drag it around.

And while you certainly get what you pay for, the Paddle North inflatable dock isn’t cheap, costing $699 (U$D 799 for the 12 x 6 feet version). While this isn’t out of the ordinary for docks of this size, its cost is something worth considering when shopping around for the best inflatable dock.

Who is it for?

When you consider all these pros and cons, it becomes fairly clear who this product is for. The Paddle North inflatable dock is best for buyers who planning on using it with large groups. This will allow you take maximum advantage of the dock’s large size and sturdy build, while also allowing you to move the dock around with minimum inconvenience.

If that description doesn’t fit you, there is no shortage of inflatable docks that could potentially serve your needs. The Solstice Inflatable Dock, for example, offers many of the same features and stability, while being overall slightly smaller; this makes it much easier to transport once its inflated.

And if you need a little more comfort, the AquaSofa Pool float, also by Solstice, could be the way to go. While this doesn’t have the same capabilities as the Paddle North model- you can’t use it to launch other vehicles, for example- its backrest and cushioned floor certainly make it a more luxurious choice for a laid back day on the water. 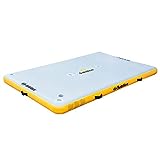 (178)
$423.87 $422.95
Package length: 26.035 cm Package width: 50.165 cm Package height: 71.755 cm Product Type: CARGO STRAP
(as of May 19, 2021 - More infoProduct prices and availability are accurate as of the date/time indicated and are subject to change. Any price and availability information displayed on [relevant Amazon Site(s), as applicable] at the time of purchase will apply to the purchase of this product.)