Investigation underway after a massive cruise ship plowed into another tourist boat and dock on a canal in Venice, Italy. Five people were injured in the crash, which was caught on camera by people on the ship and on land. Top Italian officials have immediately called for cruise ships to be banned from using the Giudecca Canal in Venice after an out-of-control cruise ship rammed both a dock and a river tourist boat in the Italian city.

Videos of the crash show the MSC Opera cruise ship, apparently unable to halt its momentum, blaring its horn as it plows into a much smaller river boat and the dock Sunday as people on the dock run away in panic. Italian media have posted an audio clip of the MSC Opera’s pilot telling emergency officials that the cruise ship experienced a loss of controls and “activated all the procedures to avoid” a collision with a riverboat and dock in Venice.

The pilot says anchors were dropped and that tugboats connected to the ship’s bow and stern took maneuvers to stop the ship. The pilot is heard saying that “here on the bridge, we don’t understand what happened.” An investigation has been launched. The collision injured five people and froze boat traffic in the busy canal, and forced another MSC cruise ship to drop anchors in front of the historic city as it waited for the damaged vessels to be removed.

#BREAKING At least five people were injured after the MSC Opera cruise ship collided at the San Basilio pier in #Venice with a small boat, La Repubblica reports. pic.twitter.com/ATyAoOOiSa

MSC Cruises, an international cruise ship line with its headquarters in Geneva, says its ship, the MSC Opera, experienced a mechanical problem Sunday as it was docking at a passenger terminal in Venice. The company says it is cooperating with authorities to figure out what happened.

Videos of the crash show the cruise ship, apparently unable to halt its momentum, blaring its horn as it plows into a much smaller river boat and the dock as people on the dock run away in panic. The company says the MSC Opera is waiting to be allowed to dock at a terminal where large ships moor at Venice’s waterfront.

The MSC Opera was built in 2004. It can carry over 2,675 passengers in 1,071 cabins. According to its sailing schedule, it left Venice on May 26 and traveled to Kotor, Montenegro, and Mykonos, Santorini and Corfu in Greece before returning Sunday to Venice.

The collision happened about 8:30 a.m. Sunday on the Giudecca Canal, a major thoroughfare that leads to Saint Mark’s Square in the northeastern Italian city. Video of the crash shows the cruise ship, apparently unable to halt its momentum, plowing into the much smaller river boat and the dock as dozens of people run away in panic.

My God. Absolutely frightening video of what happened this morning in Venice when a cruise ship lost control approaching the pier #grandinavi pic.twitter.com/2rJseEdk4N

This is a photo of the smaller boat damaged as a result of the MSC Opera incident today in the #Venice. Local social movements such as @NoGrandiNaviVe have warned against these dangers for years. #masstourism #cruiseindustry #overtourism #NoGrandiNavi pic.twitter.com/tUNe7hPexr 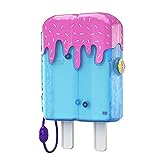 $14.99 $13.79
This adorable Pocket World Sweet Sails Cruise Ship compact is great for On-the-Go fun and opens to a fun-filled cruise adventure featuring micro Polly and Lila dolls and a jet ski accessory. Discover and explore these fun activities and reveals: the ... read more
(as of May 12, 2021 - More infoProduct prices and availability are accurate as of the date/time indicated and are subject to change. Any price and availability information displayed on [relevant Amazon Site(s), as applicable] at the time of purchase will apply to the purchase of this product.)